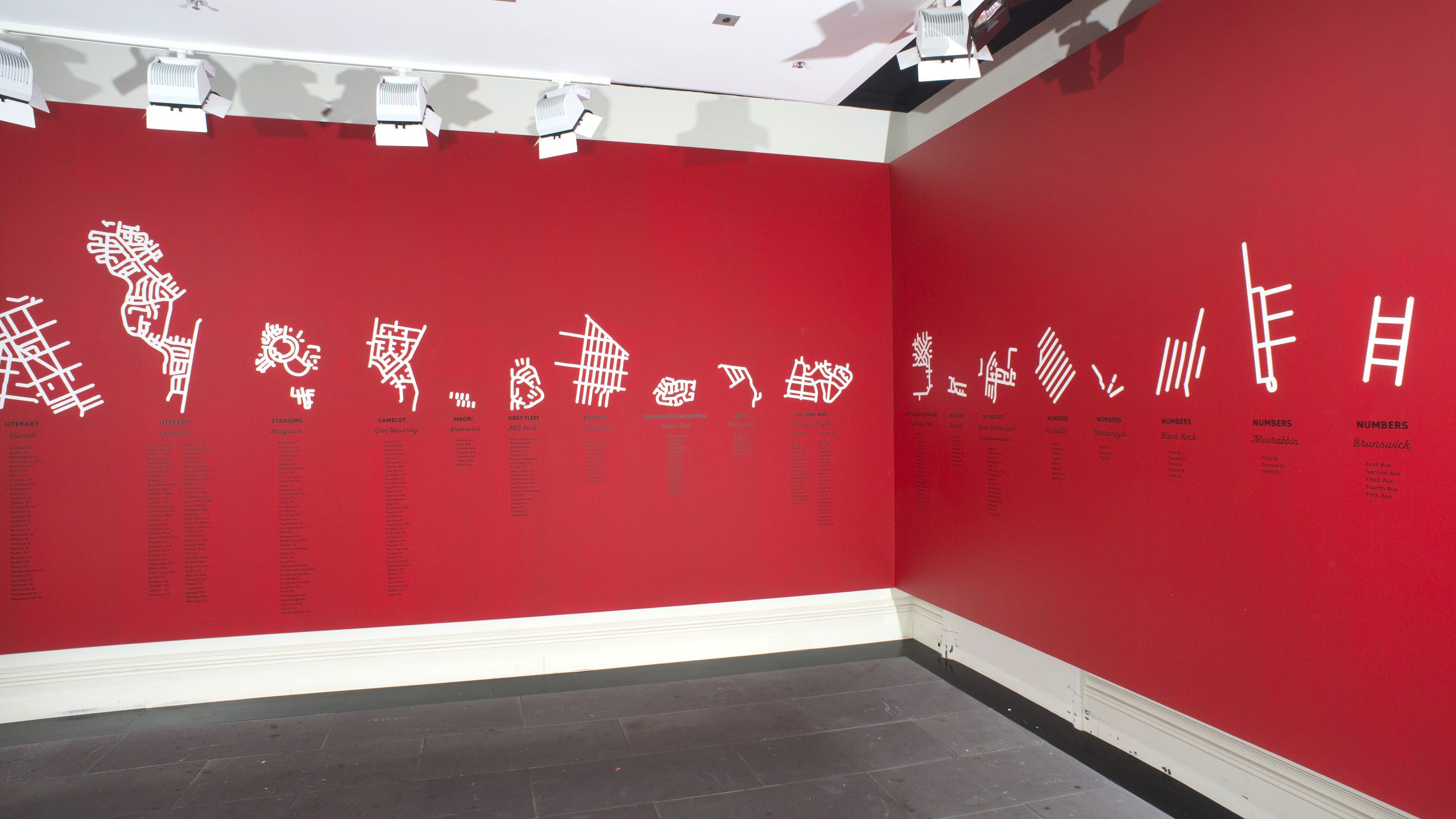 As a child growing up in a 1960s housing estate on the outskirts of Melbourne I would watch in excitement as new streets and courts were created seemingly overnight, and with them the skeletal wooden house frames that we would immediately transform into impromptu playgrounds. But what I found most intriguing about these newborn streets was the final, finishing touch – the arrival of a little van of men who would speedily erect the street signs, at last providing our ‘playground’ with a more official title. These street names were ordinary enough on their own, but when seen in sets, a distinct theme would emerge.

In the case of my immediate area there was a very distinct Anglo-Irish theme running through the street names; I lived on McAuley while my friends were on McCrae. It never dawned on me that the answer lay on the ‘big house on the hill’ – the huge hilltop convent that overlooked our suburb. It was from their land that the entire estate had been subdivided many years before. With the process of carving up the land came the process of naming, and so it was that my neighbourhood streets were named after the Catholic nuns from the convent. Once I learnt of this historical lineage, the area suddenly seemed to don an alternative identity, one that offered a richer and deeper story than what I had assumed was just a random selection of names. The story of my suburb gave some meaning and a sense of continuity to those words on the street signs. This narrative grew out of an authentic source – real people, real names and above all, a real provenance.

Looking across any metropolitan map of Melbourne, the careful observer begins to see curious patterns emerge – thematic clusters – developed to bring sets of streets together under a single concept. Individual street names, meaning nothing when read individually, are in fact composite parts of these larger narratives. The themes underlying these clusters are rich and varied – from the expansive Camelot theme running across 38 streets in Glen Waverley, right through to the Strawberry Fields estate in Narre Warren South estate which features 16 Beatles-themed streets.

Naming something is a way of telling its story. Like many old adages, the phrase ‘to name is to own’ carries more than an ounce of truth and helps to explain why marketers feverishly appropriate our popular phrases, words and songs. They are more than aware that naming brings with it values and perceptions. Naming the streets of an estate under an overarching concept unites that which was divided, presenting a convenient form of packaging the real estate for easy consumption. Buying into an idea is much more palatable than negotiating with the unknown. The naming of new estates is now a very considered decision and often used as a promotional tool by development companies and their marketing agencies. As one developer noted of a new Bundoora estate, ‘The names weren’t about what was already there. They were more about what we were going to create’.1 Although aspirational street naming is nothing new, the target of this aspiration has changed. Viewed chronologically, street naming experienced a set of three distinct periods. It began with a British, imperial and aristocratic tone; transitioned into a more Australian, civic and nationalistic form; then finally focussed on marketing, aspirational and pop-cultural references. But whether for God, king and country or a popular TV show, the naming of new residential areas is about ‘selling a promise of a particular kind of utopia to a targeted demographic’.2

The aspiration for an inner urban experience has given rise to one of the oddest forms of clusters there is – the ‘mini-melbourne’ cluster. These feature a gridded network of streets whose names playfully mimic those of the central business district (Flinders, Collins, Bourke etc). And so it is that in places as far afield as Red Hill, Hastings, Thornbury or Mentone, one can stand at the intersection of these familiar streets and have an ‘alter-urban’ experience – a quieter, suburban facsimile of its city counterpart. Urban in name only.

So what do these clusters say about us and our environment? Clustered street naming represents an early form of branding. So early, in fact, that it was not so much imposed upon our urban landscape as interwoven into how we perceive our cities and suburbs. Each thematic cluster brings with it the aspects we associate with our contemporary notion of branding – a distinct persona, a notional identity and a specific set of (usually desirable) values. More than just a form of navigation, they are a tool of identity. This form of branding could be considered vernacular in that clusters are often tied in with local references and languages – such as the the nest of 14 streets in Berwick named after Essendon football players from the 1980s3.

Such local references offer unique insights such as the aviation-themed Burwood (Boeing Crt, Dehavilland Ave, Ansett Cres etc) or the golf course-themed Kingsbury (Bunker Ave, Driver St, Wedge St, Flag St, Green Ave, The Fairway, Tee St, etc). Others express their parochial aspirations through seeking to be a part of a wider theme, such as the 41 streets that radiate from Waverley Park, all named after international stadiums. Other clusters appear completely whimsical, such as the Ancient Greek zone of Doncaster (Andromeda Way, Artemis Crt, Olympus Drv, Antigone Crt etc). So common are these themed clusters that entire tracts of the city and suburbia are transformed into dense patterns. The flat housing estate of Lynbrook offers a staggering 77 streets named after writers (dwarfing the renowned literary cluster in Elwood) while in Avondale Heights the Hundred Years’ War between France and England is playfully re-enacted with 24 French streets facing off against 23 English streets, all referring to the period. In an age where cities are conspicuously branding themselves in an attempt to muster a collective sense of self 4 these vernacular or localised identities are often overlooked as a source of defining our sense of self and place.

In direct discussions with those living within clusters, many residents were not only aware of the street naming theme area but thought that it added to a sense of community. ‘It influenced our decision to live here… I like the fact that it’s part of a theme, it gives it a village feel’. 5 Others saw a link between the cluster and the persona of the area and its residents; ‘When we first moved in, it was quiet so the (literary) theme suited. It was more of an artsy area then with interesting characters so it was a good fit’. 6

Stories transform and add meaning to a place. The power of a story is amplified by its intimacy and its direct connection. The names we give things deeply influence such stories, particularly when they are from the very streets that surround us. Our ability to read and uncover the stories and patterns within clusters could not be better timed. Just as the city planners and developers looked down upon their early maps showing wide open expanses ready to have their identities forged through naming, we now look upon our cities through a similar viewpoint – from above. Thanks to the unlikely hand of technology, the silent connections and stories that underly clusters are now more apparent than ever to the viewer. Advancements such as Google Maps show us our cities topographically, viewed aerially rather than along a common horizon.

Naming is the basis of clusters. This makes them well suited to current and future ways of looking at our cities. The immediate method of locating anything – a place, a person, a restaurant menu, medical conditions – is by its name. It is the language of the online search engine, ensuring connections are made (or not) simply by using this one central criterion, the name. All of this has made the ownership of names highly commodified. Even the term used to describe this, ‘name real estate’, reflects the process of subdividing up both our environment as well as our language. Rather than just walking us through the narrative footprints of history, street name clusters gesture to future readings of our cities – an individualised experience made up of endless connections and patterns of information, all located by name and viewed from the god-like perspective of the satellite. In an age where people are intrigued by sharing and visualising information, the reading of clusters offers something particularly valuable – a whole new way of seeing what we thought was familiar.

3. This cluster is more likely to have been a personal interest by the developer rather than a well-considered marketing strategy.

4. Much recent effort has been put into unifying the many Melbourne branding identities.