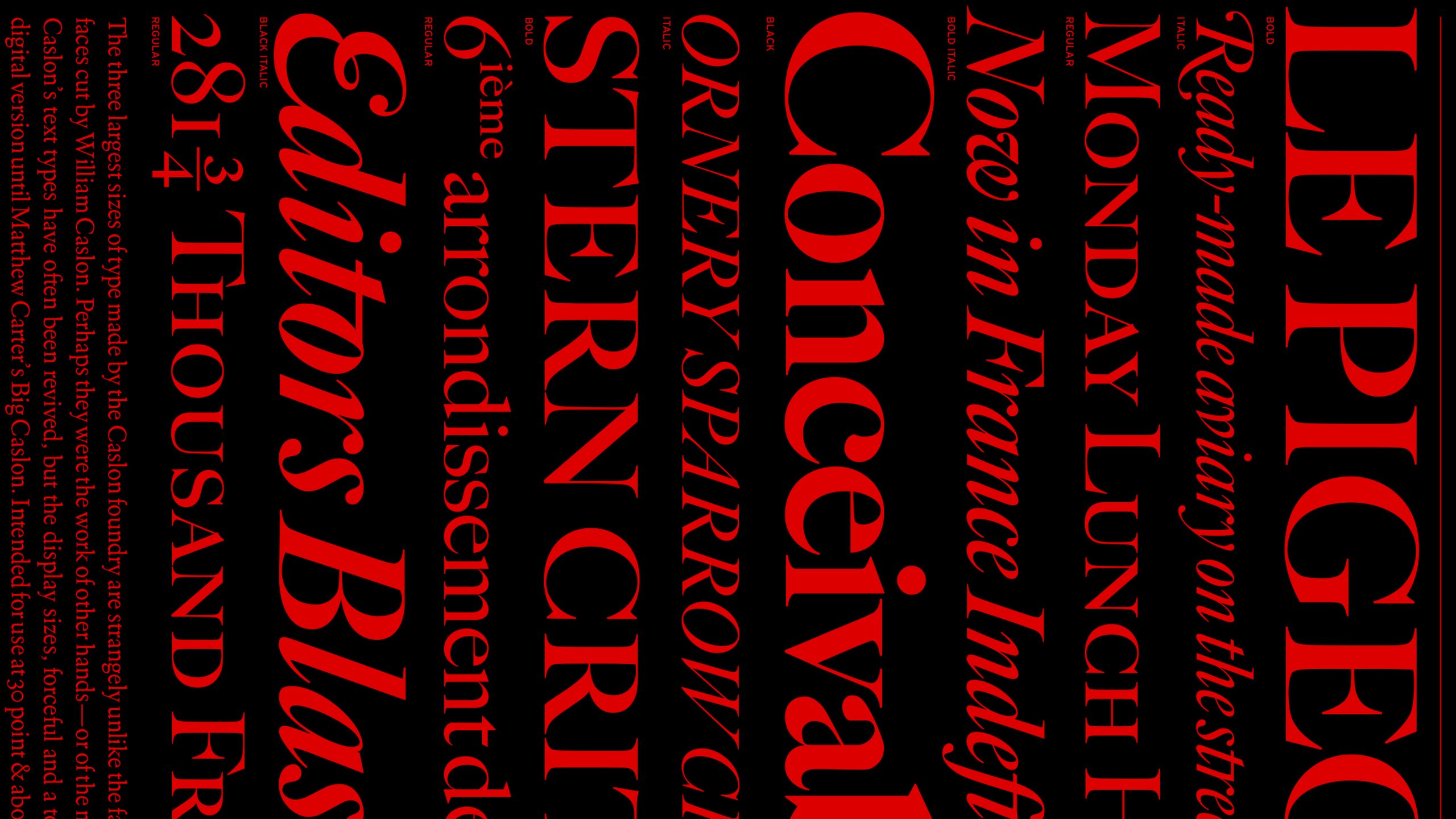 Of all the arts and crafts, none lives in the dirty tepid bathwater of the past than does typography. It seems to be a part of human nature that whenever anything is produced, people immediately want to classify it, put it in a neat box and then feel unthreatened by the conquest of this new form. But typography is a moving target.

The field of typography seems to be particularly wrought with confusing terminology and contradictory titles, usually as a result of international differences in interpretation. Some terms are wonderfully consistent throughout changes in technology, such as leading (so named because of the measured strips of lead that would be inserted to separate lines of metal type) but others have become somewhat fuzzy around the edges. At the current curious and exciting time in typographic history, we may have to re-define our system of type classification – even the most basic terms of serif and sans serif.

The classification system that presently exists was created by Maxmilian Vox, a french designer in the early part of this century. He invented a relatively simple system by which the older and very ambiguous terms such as gothic, grotesque and modern were replaced by eleven categories. It is not a mutually exclusive system – one font may belong to more than one category. It is not a perfect system, but the only one to receive the consensus amongst the major international typographic bodies such as Atyp I and be granted as a British standard (although this was withdrawn in 2021).

Humanist
Early Roman types, such as Centaur (Rogers) and Kennerley (Goudy) which are based on humanistic script. They classically have a sharp and somewhat fine quality to them.

Garald
Roman types derived from the type cut by Aldus Manutius by Francesco Griffo. (and yes, to answer your question, that is the same Aldus whose name appears on your Freehand software package) These typeforms include such well known faces as Garamond (Garamond) , Bembo (Griffo), Caslon (Caslon) and Sabon (Tschichold). The term “Garald” is formed from Garamond and Aldus.

Transitional
Based on an Academie des Sciences report whereby each letter is drawn on a square containing 2,304 tiny squares. With the power of hindsight, this mathematical system was curiously similar to the present-day digital method. John Baskerville, known for his ‘rationalist and realist’ approach to type design, embodied this ideology. Examples of this category are Baskerville (Baskerville), Bell (Austin) and Caledonia (Dwiggins). Transitional is so called because it is seen as a transition from ‘old face’ to ‘modern’.

Didone
Initially invented by Firmin Didot and later perfected by Giambattista Bodoni, this category is characterised by hairline serifs and vertical shading, both features recently a product of better printing methods and paper-making. The title ‘Didone’ is not surprisingly a fusion of the names Didot and Bodoni. Examples of Didone are Bodoni (Bodoni) and Walbaum (Walbaum).

Mechanistic (Slab Serif)
These types emerged and prospered at the beginning of the industrial revolution, the large area of their faces ideal for decoration. These types are also called ‘Egyptian’ in England. Examples of these include Rockwell (F.H. Pierpont), Clarendon (H. Eidenbenz) and Melior (H. Zapf).

Lineal
The classification of type without serifs (sans-serif) was particularly confused with the English calling them ‘grot’ (from grotesque), ‘gothic’ in America and ‘grotesk’ in Germany. These are often subdivided into: Grotesk: sans of 19th Century origin. eg. Headline Bold, Monotype 215/216. Neo-grotesque: Modern sans serif faces such as Univers (A. Frutiger) and Helvetica (M. Miedinger). Geometric: Based on geometric shapes , usually monoline (consistent line widths) with minimal difference between the letters. Futura (Renner) and Eurostyle (A. Novarese).Humanist: Based on the proportions of Roman inscriptions (for the capitals) and the Humanistic/Gerald forms (for the lower case), these include Gill Sans (E.Gill) and Optima (H.Zapf).

Glyphic
This category is based on stone-cut typographic forms, so they tend to be capitals. Stonecutting being one of his many skills, Eric Gill designed Perpetua, a characteristically ‘Glyphic’ from. Albertus (Wolpe) and Hadriano (Goudy) are also examples of Glyphic.

Script
This is where the terms can become a little ambiguous. Script is based on handwriting not to be confused with italic (a sloping face associated with an upright version). Faces characterising script include Mistral (R. Excoffon) and the dreaded Brushscript (R.E.Smith).

Blackletter
Generally only seen on old pub facades or clichéd wedding invitations, Blackletter challenges contemporary legibility with its heavy broken forms and angled terminals. Blackletter is often broken down into specific Germanic categories – Gotisch, Rundgotisch, Schwabacher and Fraktur. There appears to have been a slight revival in the use of these faces, though I suspect this is for the purposes of typographic novelty. Examples of Blackletter include Engravers Old English (Coban/Benton) and Cloister Black (J.W. Phinney).

But what about the future?

As you can see from the categories listed, trying to classify typefaces was a difficult thing – and it seems it is getting harder. Like many things in late twentieth century, old distinctions and areas of demarcation are eroding – and typography is not immune from these changes. One can only view these developments in a positive light, there are typefaces being developed all the time and the system of classification has to accommodate them or be made redundant altogether. This expansion of the way we place in the greater scheme of things is, like all change with established systems, bound to upset the more traditionally orientated amongst us. So how might this system expand – in which direction? With only a few exceptions most of the type has been borne out of digital typographic forms. This medium has lent itself to a very democratic, expressive age. We now have fonts that cannot be classed as serif or sans serif, where two fonts are fused together like siamese twins, Emigre’s Dead History Roman for instance – which of the fonts used in its construction should it be classed under? Just taking this single example one can see how the present system is now inaccurate. A entire new set of classification is clearly needed if we are to include the newer typographic forms. An extension of the categories might include the following:

Bitmapped
Signifying the earlier years of digital type design specifically for low-resolution laserprinters and monitors, this category is characterised by the prominent pixels that constitute its forms. Despite technological advancements that have effectively made such crude forms redundant, bitmapped fonts are still popular when designers want to attain the ‘low-res’ look. The best examples of these fonts are Emperor, Emigre, Senator and Oakland (all from Emigré).

Distressed
These typeforms tend to look like somebody has put them through a blender. Generally unsuitable as a text face, these crumbling beauties are great attention-getters, though their novelty appeal (when applied without an idea) is short. Such fonts include Trixie (Emigré), Morire (T-26), Carnival (T-26), Ghettout (Garagefonts), Confidential (Just Van Rossum).

Abstracted
More of an experience than a typeface, these forms are not necessarily based on existing alphabet but rather are a series of visual codes matched to keyboard commands. They are best not judged on the conventional parameters of a typeface – but rather on what they offer as a set of icons. Examples include Niwida (E. Blokland) and Bifur (Cassandre).

Hybridised
The ambiguous nature of these forms make them the gender-benders of the world of typography. Being a fusion of two or more typefaces, these fonts often create a surprisingly sensitive sense of harmony. They cannot be classed necessarily as serif or sans-serif – in fact it’s distinctly best that one doesn’t for fear of offending the ‘lesser’ typeface of the two. These are the mutant lovechildren of the typographic digital age. In this category are such fonts as Missive (T-26), Entropy (T-26), Fudoni (Kisman), Protoype (J.Barnbrook).

Mixed bag (Super Family)
Contradicting the nineties trends towards smaller families, these forms are the most prolific by far. ‘Mixed Bag’ fonts are fonts such as Luc(as) de Groot’s Thesis which within its family the three variants – Thesis, Sans, Serif and The Mix. This results in an enormous array of weights (try scrolling down about 150 weights) and a total of 12,500 different characters. Due to their complexity and the skill required for their production ‘Mixed Bag’ fonts are increasingly appealing. Pictured above is Monotype’s Macklin super family.

Pictorial
Making Zapf Dingbats look like early caveman drawings, these forms are redefining the term ‘clip-art’ so as to make it almost acceptable to say at a party. They are not directly related to the alphabet necessarily but many gesture towards being members of a larger set. To this end, some are thematic (Dick and Jane for instance). Other examples are Big Cheese (B.Aufuldish, E.Donelan) and Fella Parts (E.Fella).

Random
Based on the programming skills, imagination and humour of Dutch designers Just Van Rossum and Erik Van Blokland (aka Letterror), the most exciting and challenging of all the categories, Randomfonts have a form of inbuilt intelligence and self-identity. They know who they are and keep changing that self – everytime a keystroke is pressed. The result being a row of m’s for example all looking different to eachother. Breaking down the rules of uniformity that we love so dearly (this can interpreted sarcastically if you wish) Randomfonts are redefining the very way that alphabets, typography and language is seen. A category bound to grow in time – at the moment instances that come to mind are Beowolf, Doormat and Kosmik (All from Letterror).

This addition to the classification system is not perfect. No system truly is. Let’s take Emigré’s Backspacer for example. It could be considered to be a member of both the Pictorial and Distressed camps. The further away from the traditional ideas of type we travel. the more difficult it is to put them in boxes, particuarly as like with the randomfonts previously mentioned, they are able to change their forms with the tap of a key. But do we really need categories at all? If this difficult and somewhat inaccurate process restricts the way we view type, taking it just as a visual style, is it necessary? The answer lies in one simple fact. There are so many different typefaces, we cannot as designers (let alone the layperson) to know each font by its name or be able to spot it on sight. By having them in categories it makes the search for that elusive font just that bit simpler. There will always be instances of fonts slipping through this patchy net of type classification – but once this is accepted, it ain’t all that bad. You just have to look at the Fontshop books to realise that some form of order, no matter how flawed it is, is better than sheer chaos.